From the first pages of Modern Painters I in 1843, to the last glorious paragraph of his never completed autobiography, Praeterita, in 1889, Ruskin was a teacher, had never sat down to compose during those five and a half decades without asking himself how the words which would soon flow from his pen would benefit those who read them, an author’s sacred duty in this life being to serve as closely as they were able as an apotheosis of “the LAW of help” (see last Post, # 200: The LAW of Help).

While, as many previous posts have made abundantly clear, reading Ruskin well is not always easy. it is hardly ever attended by gales of laughter, despite the fact that, in life, as well as in his prose if one focuses, Ruskin had a fine and sophisticated sense of humor. The paucity of chuckles in his paragraphs, he would explain, should he be asked (of course he was), was because. as he saw it, things in this world had gone so awry, they could only be ameliorated by serious messages, messages that jolted those who read them into redressive action. Such was the case with the lack of what he was convinced was the paucity of serious reading of the world’s greatest literature that characterized his times, a paucity he directly attacked in his justly famous lectures “of Kings’ Treasuries’ delivered in Birmingham in 1864, a lecture we profiled in Posts 186 and 187. 186: How to Read (Or, Milton and Ruskin meet the Bishops); Post 187: The Despisings (Or, The Not Altogether Pleasant Consequences of Not Reading). Reading the greatest books humanized us, he said; and, at the same time, refined and deepened our moral understanding of life and the world. The eschewing of this immensely uplifting task, was responsible for incalculable suffering and moral laxity (this claim seemed so outrageous, few believed him then; almost surely. no one would even entertain the possibility now!)

Which–you’ll not be surprised!– brings us to the topic of what constitutes someone’s real property, a subject Ruskin had written convincingly on as early as 1860 in Unto this Last. As was not uncommon in the Fors Clavigera letters, he would reprise major issues for his readers as they proved relevant to whatever was currently on his mind. In this letter, the 70th, for September, 1876, he arrives at one of those reprises, For something to be your Property, he says,

It must be a good thing, honestly got. Nothing that you have stolen or taken by force, nor anything that your fathers stole or took by force, is your property. Nevertheless, the
benignant law of Nature concerning any such holding, has always been quite manifestly that you may keep it—if you can,—so only that you acknowledge that and none other to be
the condition of tenure. Can you understand that much, my practical friend?

[Further, it] must be not only something good, and not only something honestly got, but also something you can skillfully use. For, as the old proverb, “You can’t eat your pudding and
have it,” is utterly true—so also this reverse of it is true in confirmation of property: that you
can’t “have” your pudding unless you can eat it. It may be composed for you of the finest plums, and paid for wholly out of your own pocket; but if you can’t stomach it—the pudding is
not for you. Buy the finest horse on four legs, he is not “proper” to you if you can’t ride him.1 Buy the best book between boards,—Horace, Homer, Dante, [Shakespeare, or Bible]—and if you don’t know Latin, nor Greek, nor Christianity, the paper and boards are yours indeed, but the books—by no means!

You doubt this, my practical friend? Try a child with a stick of barley-sugar: tell him it is
his, but he mustn’t eat it; his face will express to you the fallaciousness of that principle of property in an unmistakable manner. (I suppose myself, in the rest of this letter, to be addressing a “business man of the nineteenth century.”) Thus: in the earlier numbers of Fors, I observed more than once, to the present landholders of England, that they may keep their lands—if they can! Only let them understand that trial will soon be made, by the Laws of Nature , of such capacity in them. [Consider:]

“I’ve no pleasure in that picture of Holman Hunt’s,” said a highly practical man of business to a friend of mine the other day, “nor my wife neither, for that matter; but I always buy under good advice as to market value; and one’s collection isn’t complete without one.”

A man’s Property, then, the possessions “proper” to him. his “own” rightly so called… consists of A. The good things; B. which he has honestly gotten, C. which he can skillfully use. These are the A, B, Cs of Property Good things, I say, not Bad ones; his, again rightly so-called, “Goods”, not his “Bads!”

We must leave out of the question, for the moment,1 the element of benevolence which may be latent in toilette; for the main economical result of the action of the great law that we can only have wealth according to our capacity, in modern Europe at this hour, is that the greater part of its so-called wealth is composed of things suited to the capacity of harlots and their keepers,—(including in the general term harlot, or daughter of Babylon, both the unmarried ones, and the married ones who have sold themselves for money),—as of watches, timepieces, tapestries, china, and any kind of pictures or toys good for bedrooms and boudoirs; but that, of any wealth which harlots and keepers of harlots have no mind to, Europe at present takes no cognizance whatsoever. .. So you see it is perfectly possible to have property, and a very costly quantity of it, without making any [true human] profit of such capital! It is a very subtle and lovely [topic], not to be discussed hurriedly, my blind practical friend.

The greatest of an ever-dwindling number of fine literary magazines in my country is, and for some lengthy time has been, The New Yorker, a weekly, occasionally bi-weekly, miscellany of essays on important,. well-researched and will-written topics (of late; air pollution, global-warming) accompanied by restaurant, TV, and movie reviews, poems, some new fiction, and, every few pages or so, clever cartoons, all easily grasped by a highly educated New York readership. [Other surviving, but in my view not quite as significant, literary magazine contenders would be Harper’s and The Atlantic (both monthlies).]

Not long ago, a friend, Susan McNeil Marshall, knowing of my love of literature, my stroke, and the long road to repair which accompanies the latter, found, in a high school library deaccession sale (what a thing!a “deaccession–deaccession of BOOKS!–sale!” in Philadelphia, a copy of a smallish volume: Bob Mankoff, ed., The New Yorker Book of Literary Cartoons (New York: Simon and Schuster 2000). Kindly, she bought it and set it aside for me. Needless to say, I was delighted when it arrived in Geneva a couple of weeks ago! Leafing my way through it a number of times, I soon found some favorites as the apt little gift slowly became my “property” in Ruskin’s sense, I thought I’d share a few of these cartoons with you today under the assumption that, as Susan’s note which arrived with the book reminded me, that “laughter, perhaps especially in pandemic times, is the best medicine!” Some of them might even put a smile on the frequently dour, and worried face of Mr. Ruskin! and, sometimes be reminded of themes in earlier Posts, My favorite of these favorites is the last. I hope they amuse a little. The first picture is of a very young Mike Gantcher reading his favorite Ruskin collection, Clive Wilmer’s edition of Unto this Last and other writings of John Ruskin. Mike was, first, a fine student in my sociology courses that featured the Brantwood Master, and, ever since his graduation some decades ago, a treasured friend. 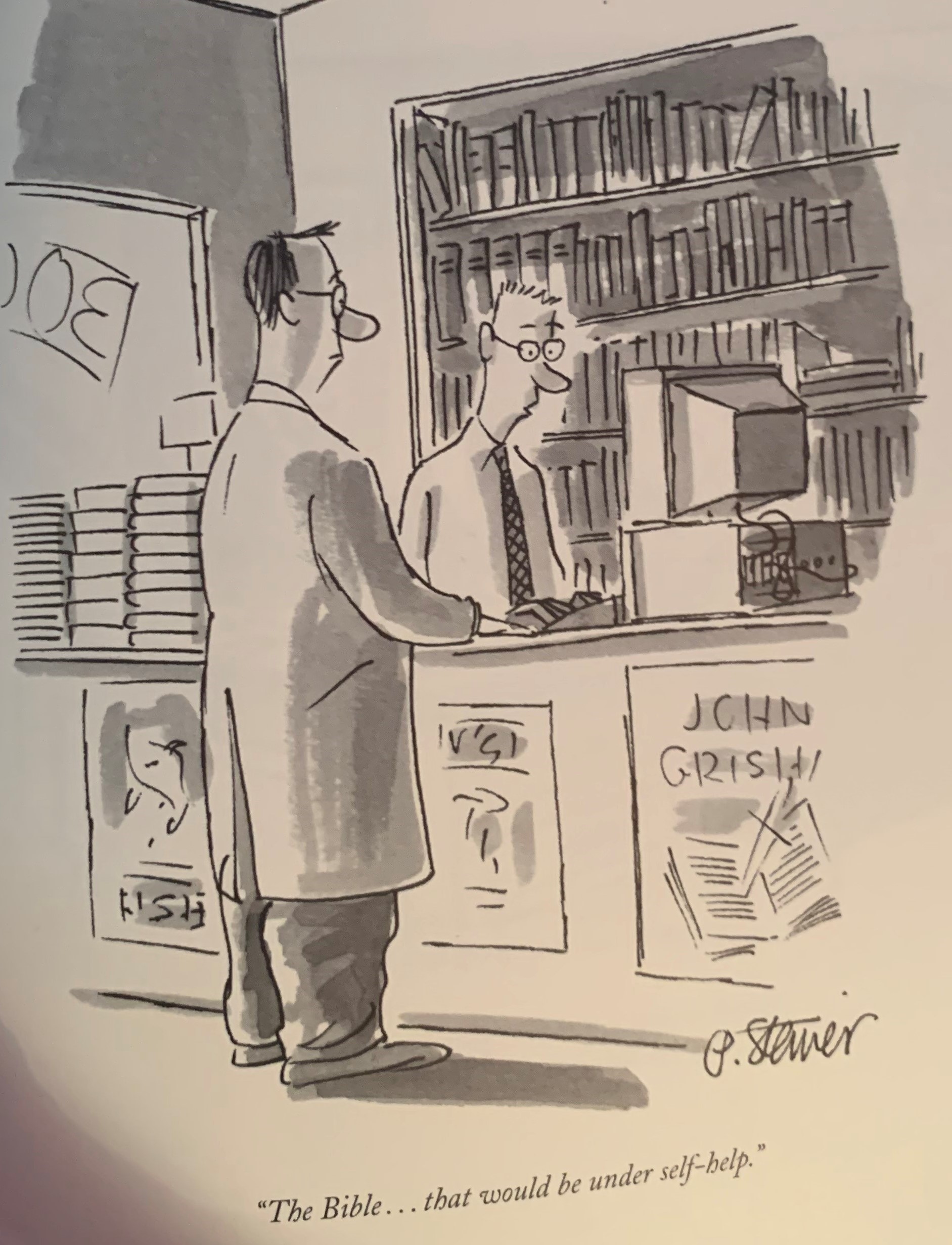 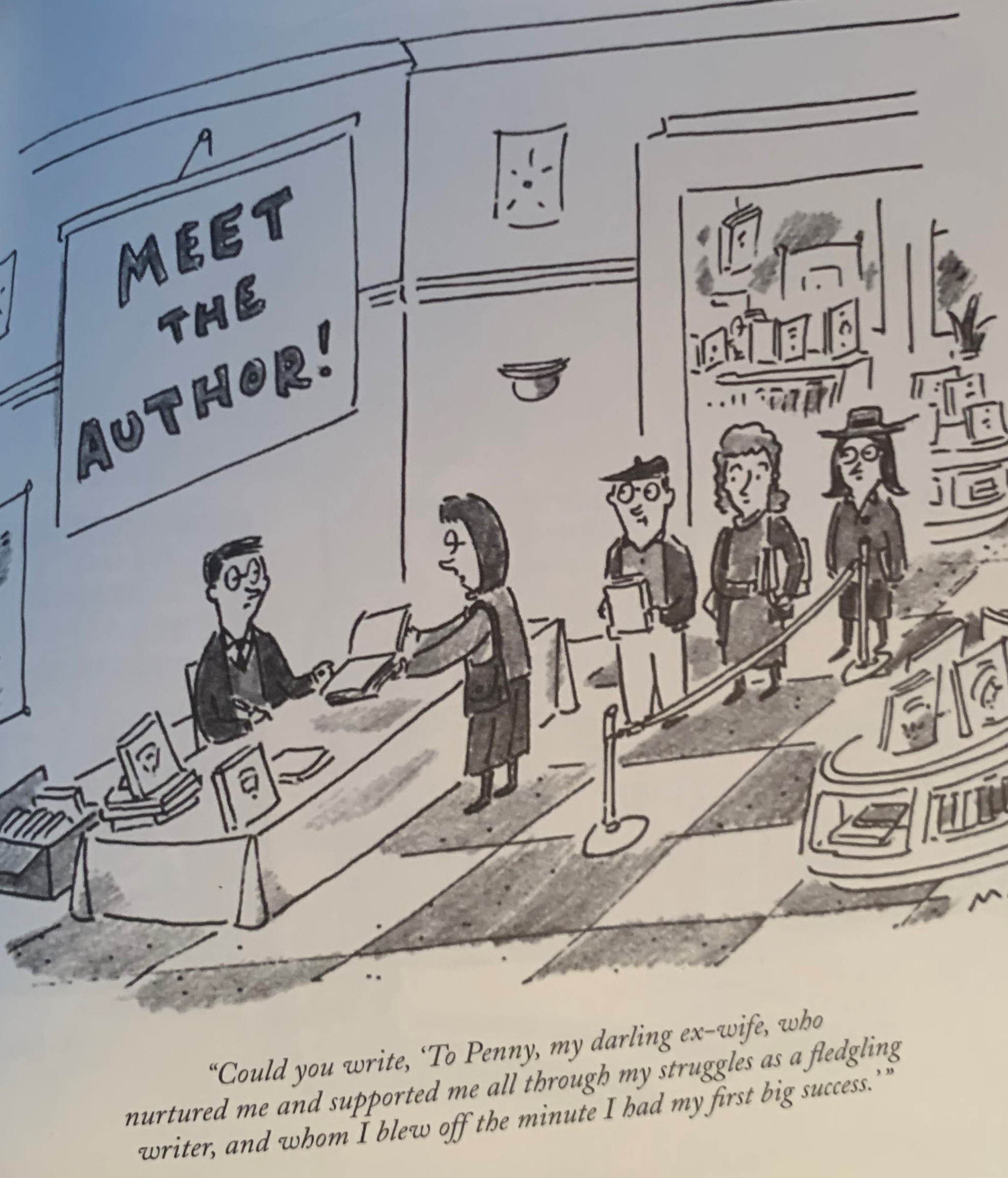 Until next time, good readers, I wish you continued wellness and ongoing joy and lovely Use of your Property–properly so-designated!