If you read through the Fors Clavigera letters Ruskin wrote to the workers and laborers of Britain between 1871 and 1884 (there were, overall, 96 of them), you will discover our subject writing at his didactic (and, frequently, acerbic) best. It was the time, you’ll recall, during which he was creating The Guild of St. George (originally, The St. George’s Company). He conceived it to be a group of like-minded others who, with him acting as its first Master, would work, and some live, together to create, in the face of ever-degenerating, ever more corrupt, Western civilization, a decent and humane place for people to draw their breaths in.

It was also conceived to be a completely honest and open society. Every time people kept secrets, Ruskin often said, there was covert self-interest and often, corruption either at work or pending. (There’s pretty good evidence for this, I think.) For this reason, it was essential that all matters pertaining to money–that root of all evil (1 Timothy 6:10)–would be collectively known to all Companions (as the members of the Company or Guild were to be called). Indeed, to ensure that this knowledge would be a reality instead of an indeterminable ideal, everyone–all men at least–would be required to wear trousers outfitted with glass pockets. Here is how he first related the idea to readers in the 8th Fors letter in August, 1871:

You know, at least, that we in our own society are to have glass pockets as we are to give the tenth of what we have to buy land with, so that we must every one know each other’s property to a farthing. And this month, I will begin making up my own accounts for you, as I said [in an earlier letter that] I would…

The idea, of course, of contents visible pockets, was that such would curtail subterfuge (even the most honest of us, Ruskin reminded, were sometimes tempted toward that tempting end of the veracity continuum). It proved a difficult concept for those living in his own time to accept. I suspect it still might be a difficult concept for those living in our time to accept. Then, they all thought he was crazy; perhaps, today, many would think the same.

For over half of the Fors letters, he would attach, as the main letter had ended, a section called, “Notes and Correspondence.” In these, he would regularly quote sections of letters readers had sent him pertaining to issues raised in earlier letters, remarking on them either before or after the reproduction. A number of times a year he would use the section to report on matters relating to the Guild and its operation (successful or not), as well as to comment on his performance as Master. Sometimes–as below in the “Notes and Correspondence” section for the 62nd Fors letter (February 1876) –he would use the space to reprise ideas introduced earlier–like the importance of wearing glass pockets.

I am surprised to find that [the index that I created for] Vols. I and II of Fors does
not contain the important article, “Pockets,” and that I cannot therefore, [easily] refer to the place where I have said that the Companions of St. George are all to have glass pockets [the 8th letter, cited above], so that the absolute contents of them may be known to all men.

But, indeed, this society of our is, I believe, to be distinguished from other close brotherhoods that have been, or that are, chiefly in this: that it will have no secrets, and that its position, designs, successes, and failures, may at any moment be known to whomsoever they may concern.

More especially, the affairs of the Master and of the Marshals–when we
become magnificent enough to have any!–must be clearly known, seeing that these are to be the managers of public revenue. For although…they will be held more qualified for such high position by [their being content to remain] in poverty [rather than shouldering the] responsibility [which attaches to] wealth…the complete publication of their accounts, private as well as public, from the day they enter on the management of the Company’s funds, will be a most wholesome check on the glosses with which self-interest, in the minds even of the honestest people, sometimes may color or confuse their actions, [as well as] being examples to the accountants of other public institutions… [And, whether these have been] wisely or foolishly directed, the expenditures of the St. George’s Company will be always open, in all particulars, to the criticism not only of the Companions, but of  the outside public.

Very nice, we moderns might think (in a generous mood). But wholly impractical, we conclude, just as quickly, so inured have we become to even entertaining the idea that human beings can, willingly, act so openly and honestly to one another. Have the CEO’s and their henchfolk make all their financial records matters of public record?! Have my neighbors, even the members of my family, know the details of my unglassed pockets? Good luck with that!

Of which caustic attitude, Ruskin was, of course, most sensitive, knowing that, if what he recommended was ever to tiptoe toward an accepted reality, that would only happen when it was indubitable to all that the CEO–or the Master–practiced as he preached. As was, in his case, the case, as Ruskin demonstrated in the following paragraphs taken from this same “Notes and Correspondence” section, where he reported (to the farthing) to his readers–and, if they chose to later be such, the examiners of his financial records–the details of his expenditures for the first month of 1876 in a subsection he entitled, “The Affairs of the Master”:

When I instituted the [St. George’s] Company by giving the tenth of my available
property to it, I had, roughly, seventy thousand pounds in money or land, and
thirty thousand in pictures and books. The pictures and books I do not
consider mine, but merely in my present keeping for the country, or the
persons I may leave them to. Of the seventy thousand in substance, I gave
away fourteen thousand in that year of the Company’s establishment and have since lost fifteen thousand by a relation whom I tried to support in business… [The result is that] my seventy thousand is reduced by certainly not more than thirty, [which makes it] very clear that I am too enthusiastically carrying out my own principles, and am making more haste to be poor than is prudent.

[Such always his recommendation: to wit: that, if you had more money than you needed to live decently, you should do all you could to rid yourself of the excess (by dispensing that excess to those who needed it more, especially to those who needed it most, in order that you could live on the least amount of cash you needed to meet your own essential needs, so that you would leave what we might call today, “the smallest possible footprint on the planet.” His paragraph continued as follows:]

[My expenditures, whether] exemplary or necessary, will be better understood after I have given account of [them] for a [recent month]. Here are my opening expenses, then, from 1st January to 20th [of  this year]… I content myself, being pressed for space in this number [of Fors], with giving merely the sums of checks drawn… [Followed by the notations below, recorded as pounds, shillings, and pence:]

Periodically, throughout the years he published the Fors letters, Ruskin would provide his readers with similar reports.

What do you think? Good idea? And if, perchance, you think perhaps not, why so? Comments gladly received.

For your enjoyment, here is an image of the Filippo Lippi painting that Ruskin, ever the teacher, paid Mr. Charles Murray to copy so that he would be able to use it as an illustration in the main text of the Fors letter that preceded this iteration of “Notes and Correspondence”: It’s entitled “Madonna, Child, and Two Angels,” and was created somewhere between 1460 and 1465. You can see it in the Uffizi, Florence: 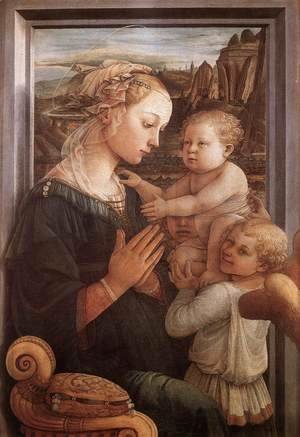 Please continue well out there as you consider the possibility of adjusting your wardrobe.