Ruskin, it is often said, is a polymath. I’ve never much liked the word, finding it a bit harsh and carrying an intimation that he was more concerned with numbers than he ever was. It derives from the Greek, polumathēs, “having learned much,” which, in its turn, comes from the combination of  polu- “much” + the stem of manthanein, “to learn.” Accurate enough, I suppose.

Notwithstanding, still not comfortable with the word, I decided to go looking for a synonym, and, to my astonishment, as soon as I typed “polymath” plus “synonyms” into the search engine, got 8,960,000 “hits,” in 0.43 seconds! Declining this golden opportunity to read them all, I found, at the top of most lists, these suggestions: “polyhistor” and “Renaissance Man”–the first, to me, distortive of Ruskin, the second highly offensive to him! This pair was usually followed by other substitute descriptors, such as “brain,” “brainiac,” “intellect,” “thinker,” “whiz” (also, “wiz”), “highbrow,” “bluestocking” (look that one up!), “savant,” “egghead,” “geek,” “longhair,” “ace,” and “crackerjack”! You see the problem! So I guess we have to be content with “polymath”!

Happily, in one of the finer Ruskin readers out there (see–for a list and brief commentary on most–Post 115: The Ruskin Compendia), A. H. R. Ball’s Ruskin as Literary Critic, we find the following, which, to my mind, can serve as a definition for Ruskin’s particular manifestiaton of polymathishness: Ruskin wrote, Mr. Ball tells us, on “any subject that interested him, he let his mind stream out in all its great variety of moods and thought–and it flowed with the energy and caprices of a rippling brook. He wrote on art, architecture, political economy , natural history, morals and ethics, geology, mineralogy, biography, fairy tales, military tactics, and all kinds of literature.”

Below’s a little (but hardly insignificant) one of those rivulets.

When he was writing the extended series of letters he addressed to the “workers and laborers of Great Britain” to which he gave the enigmatic title, Fors Clavigera (96 in all, posted between 1971 and 1884), Ruskin’s plan was, as always, to teach, but follow no strict plan about what should be taught when or how (in contrast to which we might compare The Seven Lamps of Architecture, where the intent of each chapter is to build on the one prior as all march toward a magnificent conclusion). And so, if on any given days, a significant idea came to him, it would often become the subject of the next Fors letter; if, in the midst of composing that letter, another worthy thought showed up, he would abandon his chief interest so that he could attend to it. His deeper idea in proceeding in this manner, as he explains at various points in the Fors letters, is that this method mirrors how the world works.

Things don’t occur in strict sequence. This happens, but it isn’t always, perhaps even ever, followed by that. Sometimes something completely surprising and unexpected shows up. (we all know what he means). In other words, there are forces (fors) surrounding us that are always at work in ways we don’t see or understand and those forces are going to do what they are going to do no matter what–or, as John Lennon put it: “Life is what happens to you while you are making other plans.” Sometimes, it is best, Ruskin says, to go with the flow. But, sometimes, it isn’t  best to do that either; each of us has to decide. To put it a little differently, the fors are real and are always doing their work, but we too are real and, because we have free will, can always decide how we will interact with them. The Fors letters are a reflection of these processes at work.

In the 47th Fors letter, the one written for November, 1874, Ruskin, who has not been happy with what he’s been reading in the papers about the subject for decades, takes it as his task to explain to his readers what benignant law is. The best way to do  this, he says, is to return to Sir Walter Scott’s discussion in Redgauntlet (1824). [For more on Ruskin’s love of Scott–he even bought, to preserve them for posterity, a number of Scott manuscripts–see Post 156.]

Then (as fors would have it) as he is re-reading his copy of the novel, something completely surprising and unexpected happens. He comes across a passage he hadn’t remembered in which Scott tells us how true love comes into our lives. “Ah,” he says to himself, “I can use this!” And so, by now well into his developing narrative on law, he simply interrupts that commentary to inserts a few paragraphs that summarize, in his own words, Scott’s observation about this vital aspect of our lives.

However, if we are to understand these paragraphs as fully as Ruskin wanted them to be understood by one particular reader, it is important that we know something about his life that few Fors readers would have known about: his deep and abiding love of Rose La Touche, a beautiful Irish girl, thirty years his junior, whom he had loved since he first laid eyes on her in 1859, and to whom, by this time (1874), he had twice proposed, only to have been twice rejected. So much did Ruskin love Rose, starting in the early 1860s, he decided he would write all his works with her readership first in mind. And, for this  reason, it is important that we keep Rose in our minds as we read what follows.

And we should keep something else, something sad, in mind too–for, as anyone who is interested in Ruskin knows, his love of Rose (and her love of him, for she did love him even if she wouldn’t agree to marry him), was, from almost its first moment, highly freighted, fraught, and, finally, very ill-fated. (Rose would die, wasted away to almost nothing and non compos mentis six months after this passage was published; Ruskin was devastated, and, although he was to live another quarter century, never got over the loss.) In which context,  we need to be aware that of the enduring problems in their relationship was that Rose could never quite understand why he loved her so. She was, after all, in the world’s scheme, nothing spectacular. Smart, yes; beautiful, yes; the cultured daughter of rich parents, yes; but hardly the kind of person a world-renowned genius would be expected to worship.

Deeply aware that she thought such things, in his interpolated paragraphs, well aware that Rose would soon be reading his words, and will be perfectly aware he is speaking directly to her, Ruskin is trying to explain why he loves her to distraction, why he cannot but love her.

One last thing: it’s often said that one doesn’t go to Ruskin for humor: he’s a very serious writer writing about very serious things. That’s true, but, one finds, the longer one walks along with him, that, at times, he can be very funny. The penultimate paragraph in the passage provides us with an especially lovely example. “Well,” he begins,

it doesn’t come in exactly with my subject today, but…there is a bit [about] love in Redgauntlet which is worth any quantity of modern French or English amatory novels in a heap.

Of course, you would say, if you didn’t know the book, and were asked what should happen…[that] the entirely prudent young lawyer will consider what an important step in life marriage is, and will look out for a young person of good connections, whose qualities of mind and moral disposition he will examine strictly before allowing his affections to be engaged. He will then consider what income is necessary for a person in a high legal position, etc., etc., etc. Well, this is what does happen, according to Scott…

The old servant of the family announces, with some dryness of manner, one day, that a “leddy” wants to see Maister Alan Fairford—for legal consultation. The prudent young gentleman, upon [hearing] this, puts his room into the most impressive order, intending to make a first appearance reading a legal volume in an abstracted state of mind.

But…he can’t resist going to look out at the window! And—the servant maliciously showing in the client without announcement—is discovered peeping out of it! The client is closely veiled—little more than the tip of her nose discernible. She is, fortunately, a little embarrassed herself–for she did not want Mr. Alan Fairford at all, but Mr. Alan Fairford’s father!

They sit looking at each other—at least, he looking at the veil and a green silk cloak—for half a minute. The young lady (for she is young–he has made out that, he admits–and something more perhaps) is the first to recover her presence of mind;  makes him a pretty little apology for having mistaken him for his father; says that, now she has done it, he will answer her purpose–perhaps even better. But, she thinks, it best to communicate the points on which she requires his assistance in writing; curtsies [and, as he] endeavors to remonstrate…disappears. “And put the sun in her pocket, I believe” as she turned the corner, says prudent Mr. Alan. And keeps it in her pocket for him—evermore. That is the way one’s Love is sent, when she is sent from Heaven, says the aged Scott.

“But how ridiculous—how entirely unreasonable—how unjustifiable, on any grounds of propriety or common sense!” [is the remonstration]

Certainly, my good sir—certainly! Shakespeare and Scott can’t help that. All they know is—that is the way God and Nature manage it. Of course Rosalind ought to have been much more particular in her inquiries about Orlando, Juliet about the person masked as a pilgrim, and there is really no excuse whatever for Desdemona’s conduct–and we all know what came of [that!] But, again I say, Shakespeare and Scott can’t help that.

Nevertheless, Love is not the subject of this novel of Redgauntlet, but Law. On which matter we will endeavor now…

At this point, his “side-message” to his Rose–and, we should not forget, ourselves–delivered, Ruskin returns to his main concern, explaining, with carefully chosen examples, in the paragraphs that follow, why simple and honest justice is always preferable to the complex and dishonest version which presently reigns…

A decade later, Rose has been dead nine years. Ruskin, in quotidian misery, has convinced himself that he was responsible for her end. Had he not loved her, he tells his friend, his beloved Sorella (sister), Francesca Alexander, living in Florence with her mother, Lucia, in a letter, Rose would be alive still. To which, the always loving Francesca–in this matter so much wiser than her wise friend–surely recalling a brief passage in a Fors letter written ten years before, replies as follows: “Oh, my dear Fratello (brother), do you not know that, when it comes to love, al cuore non si commanda?” 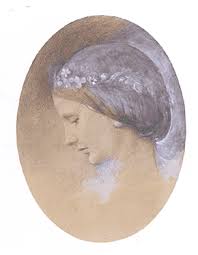 3 Responses to 177: “And She Put the Sun in her Pocket!” (or, How Falling in Love Really Happens)