172: The Erratic (For John Ruskin on the occasion of his 201st Birthday)

It is immense, a glacial erratic deposited near the end of the last ice age by a great, retreating, melting, sheet of ice, a glacier which had enveloped it for thousands of years, a reminder, for anyone happening upon it, of earlier eras when other verities held sway. Today, it rests in a shady grove about two-thirds of the way down from the summit of the Brévant, an 8300’ mountain which forms the north side of the Valley of Chamouni in the French Alps, about, as the crow flies, fifty miles south of Geneva. It is deeply interred, with more than half its bulk buried beneath the sharply slanting soil that descends to the valley floor, a thousand feet below. Surrounding it, suffusing the air with a sweet scent, is a copse of pines, some nearly a hundred feet high. Occasionally,  squirrels can be seen scurrying among the branches. Much of the erratic’s surface is covered by lichens and clusters of soft green moss, their varying colors–white, green, orange, a bit of purple–combining to make the stone seem alive. Other erratics, considerably less impressive, lie nearby, their bases encircled, like that of this principal, by carpets of pine needles. In the woods, about fifty feet to the east, a small glacial stream, cascading down from much higher up, tumbles toward the town.

In front of the great rock, a bit further down the slope, across a narrow, unpaved access road, is a lovely Alpine meadow. No more than two hundred feet wide and a hundred feet deep, it is covered from spring to fall with green and yellow grasses, and wildflowers in profusion–buttercups, gentians, asphodels, daisies! This far above the town, the cool, clear air mingles and concentrates their fragrances while the sun augments their colors, making the meadow a delight for the senses. During the summer, horses can be found there, grazing. In winter, all these, save the horses (now in their warm barns), wait patiently under the heavy blanket of snow for the coming of spring. Although the meadow is bounded on three sides by birches and aspens, these are not so high as to impede a view of the great mountains, including the greatest, Mont Blanc, which rise, spectacularly, on the opposite, southern, side of the valley.

On the east facing side of the erratic, a bronze plaque, about a yard in circumference and much patinaed by age, has been placed. In its center, in bas-relief, the face of a bearded man in late middle age is seen. His hair is somewhat disheveled, as if blown out of neatness by an unanticipated wind. His gaze is serious, and yet the overall effect, considerably enhanced by a gifted sculpting of the eyes by an artist who clearly has studied his subject well, is compassionate, a face which, if you look closely, radiates wisdom and kindness. The subject wears a great coat of the nineteenth century style. In a stroke of imaginative genius, the sculptor has chosen to cut a small, half-moon from the lower left portion of his bronze circle. The effect is stunning, imparting to the portrait a three-dimensional intensity, power, and life it would not otherwise possess. The excision, plainly visible in pictures surviving from the day in 1925 when the memorial was dedicated, has more than an aesthetic effect, for, like the tousled hair and ancient rock itself, it suggests that the empathy and acumen so beautifully rendered in the face have been gained at great cost.

Yesterday was Ruskin’s birthday. His 201st. A fine age for a great sage. As always on this day, I am moved to share some sort of tribute that acknowledges him and his genius.

What you’ve read above are the opening paragraphs of a book I’m writing, a modern interpretation of Unto this Last, the goal of which is to introduce Ruskin’s humane social thought to modern readers. The sculpted image of Ruskin that has been so beautifully placed into this erratic is one of those I will use to accompany these paragraphs when they find their final form. I thought you might enjoy the preview.

The portrait was the creation of a Michel de Tarnowsky, a French artist of Polish descent who was well-known and respected during the early decades of the last century. Knowing how much Ruskin had done for them in his many lyrical passages describing their beautiful valley and its great mountain range, the Commune of Chamonix, after deciding that they very much wanted to acknowledge the gift of his words, went looking for someone who was not only capable of creating a portrait of their great man, but someone who knew him and his work well-enough to put something of Ruskin’s soul into the portrait.

As near as I have been able to discover, few pictures exist which give us a sense of the day when the plaque was set into Ruskin’s rock. Below, thanks to the web-sleuthing skills of Laurence Constanty, is one of these few (I have no knowledge of who the depicted dignitaries are; perhaps one is Monsieur Tarnowsky?): 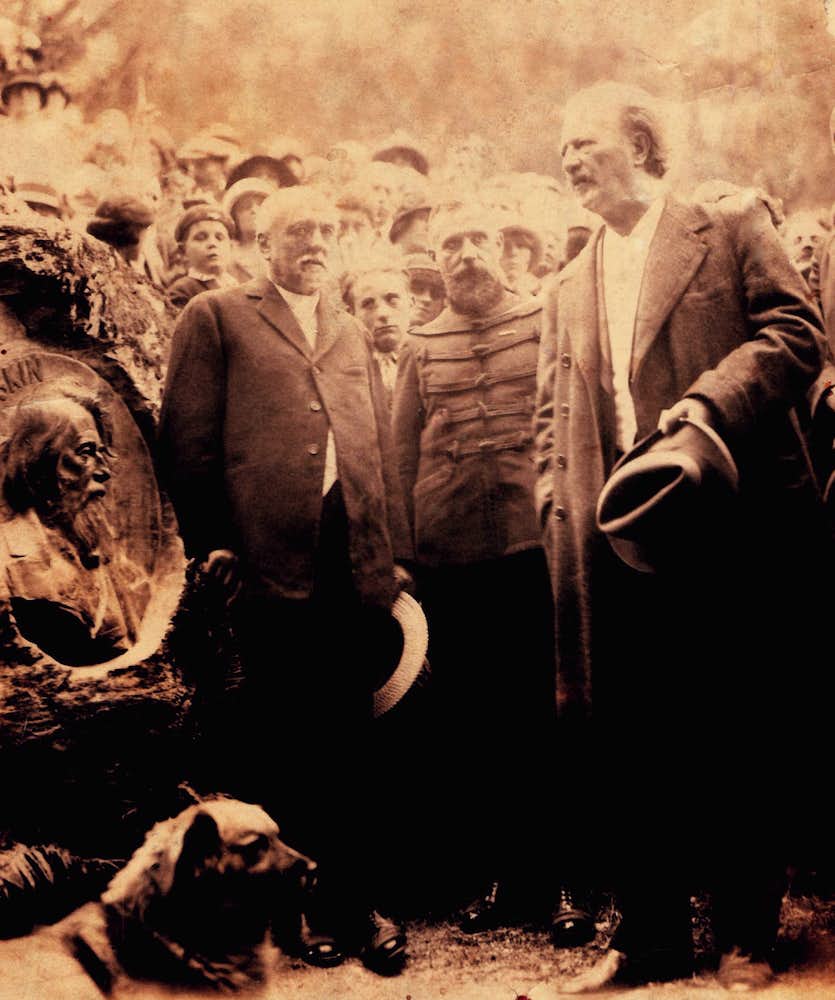 Here is a better image of the plaque, one which gives us a chance to study M. Tarnowsky’s triumph in more detail.

Ruskin so loved the vista that could be had of Mont Blanc and its surrounding peaks from his rock that, almost without fail, immediately after arriving in Chamouni and depositing his luggage in his room in The Union Inn, he would bound up the Brevant, where, if the day was clear, he would be greeted with a view almost exactly like this:

The breath-taking view was one of the signal inspirations of hos life. He would see it for the last time in the fall of 1888, near the end of his final trip on his “Old Road” through France, Switzerland, and Italy, an excursion we’ve briefly described in an earlier post (#96)

Public demand still high, he had agreed to publish a new edition of his five Modern Painters books, had agreed, too, to write an “Epilogue” that would bring the great work to its end. The epilogue was drafted at his desk in the Union Inn, immediately after he had paid what would be his last visit to his rock on the Brevant. It remains one of the most beautiful and moving passages he ever wrote, summarizing for his readers the arc of his life and the vital centrality of the mountains of Chamouni in it:

All that is involved in these passionate utterances of my youth [the first volumes of Modern Painters] was first expanded and then concentrated into the aphorism given twenty years afterwards in my inaugural Oxford lectures: that “All great art is praise.” And on that aphorism was founded [this] yet bolder saying… “So far from Art’s being immoral, in the ultimate power of it, nothing but Art is moral. Life without Industry is sin, and Industry without Art, brutality” (I forget the words, but that is their purport). And now, in writing beneath the cloudless peace of the snows of Chamouni what must be the really final words of the book which their beauty inspired and their strength guided, I am able, with yet happier and calmer heart than ever heretofore, to enforce its simplest assurance of Faith, that the knowledge of what is beautiful leads on, and is the first step to the knowledge of the things which are lovely and of good report; and that the laws, the life, and the joy of beauty in the material world of God, are as eternal and sacred parts of His creation as, in the world of spirits, virtue; and in the world of angels, praise.

With thanks and gratitude to Mr. Ruskin on this, his 201st birthday.

Be well out there.

P.S.: If you’d like to read the earlier tributes to our subject that were posted on his birthday, see:

To get a better sense of the wonderful Chamouni Valley that Ruskin loved. see our last post:

1 Response to 172: The Erratic (For John Ruskin on the occasion of his 201st Birthday)