170a: Mr. Collingwood on Ruskin’s Passing

The poignancy of our last post reminded me of another tribute written not long after Ruskin’s passing–the concluding paragraphs of William Gershom Collingwood’s The Life of John Ruskin. Collingwood, some will recall, was first Ruskin’s student at Oxford (see Post 55: A Classic), later his secretary and traveling companion, and always his devoted friend. His love of and admiration for Ruskin was so powerful that, following his graduation from Oxford, he and his family moved, first, to nearby Windermere, and then, in an effort to be closer yet, to a house, Lanehead, about a half mile from Brantwood. Trusted and loved, “Collie” spent the last two decades of Ruskin’s life in his service, constant, ever-willing, and unfailingly empathetic, as his master’s powers and mental equanimity slipped away.

Unlike Lady Birkenhead, who compiled her lovely description of the days and concerns that attended Ruskin’s death after the passage of some years, Collingwood was there. Remembering this after sending out the previous post, I thought it might be of interest if I shared some portion of his recollections. What’s below is taken from the ninth edition (1902) of his Life of Ruskin. (It is worth recalling that Collingwood was Ruskin’s first biographer. Initially published in 1894 while his subject was alive, his two-volume version remains, after the passage of thirteen decades, one of the two best in the genre; the other being Derrick Leon’s Ruskin: The Great Victorian, published in 1949. Best, both, because of their deep understanding of their subject and what he was trying to accomplish throughout his life.)

It is the 21st of January, the day after Ruskin’s departure. The weather is frightful, the rain lashing, as if the earth cannot but weep following the loss of one of its greatest souls. The Collingwoods are at Brantwood with the Severns and a few other close friends:

[W]hile we talked in whispers round the fire [that day], the news was abroad. It could not have been wholly unexpected, but it came as a shock to many a reader of the Saturday evening papers… For many, [it was as if time stood] still when they [learned] that we had lost the last of the great old men. [The next morning, the 23rd,] I received messages of hurried condolence. [On] Monday [the 24th, there came], such a chorus from the press as made all the praises of his lifetime seem trifling, and the blame [heaped on him by some over the decades] forgotten. If only, in his years of struggle and despair, he had known the place he should win…

We carried him, on Monday night, down from his bed chamber and laid him in the study. There was a pane of glass let into the coffin-lid so that the face might be kept in sight [where] it lay among the lilies of the field… It would [take] too long to tell of all the tokens of affection and respect that were heaped upon the coffin…above a hundred and twenty-five, we counted; some of them of the costliest money could buy, some valued no less for the feeling they expressed. I am not but convinced that the most striking was the village tailor’s, with this on its label–“There was a man sent from God, and his name was John.”

On the Wednesday [the 25th,] we made our sad procession to the church, through storm and flood. The village was in mourning, and round the churchyard gates, men, women, and children stood in throngs. The coffin was carried in by eight of those who had been in his employ, and the church filled noiselessly with neighbors and friends who, after a hymn and the Lord’s Prayer and a long silence, passed up the aisles for their last look, and to heap more offerings of wreaths and flowers around the bier. At dusk, candles were lit, and so, through the winter night, watch was kept.

Thursday, the 26th, brought together a great assembly–great for the remoteness of the place and the inclemency of the weather… [T]he fells [surrounding mountains] were darkly clouded and the beck [stream] roared by, swollen to a torrent. The church was far too small to hold the congregation… [Many] stood outside in the storm while the service went on.

[After its conclusion as] we carried him down the churchyard path, a drop or two fell from the boughs. But a gleam of sunshine, the first after many days, shot along the crags above from under the cloud and the wind paused. Standing there by the graveside, who could not help being thankful that he had found so lovely a resting place after so tranquil a passing into sleep? At his feet, parted only by the fence and the garden is the village school, and who does not know how he loved the children of Coniston? At his right hand [to the grave’s left] are the graves of the Beevers. His last old friend, Miss Susan Beever, lies next to him. Over the spot hang the thick boughs of a fir tree, and who does not know what he has written of his favorite mountain pine? [See P.S. at end.] [Behind] the church, shut in with its dark yews, rise the crags of Coniston, those that he [loved] in his boyhood, and prayed, in mortal sickness, to lie down beneath. 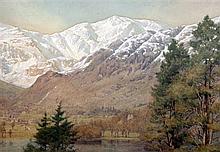 It is his birthday once more. We have just been to take the children’s posy of the year’s first flowers, no longer to set on his table, but to hide in his tomb.

It is a glorious day of frost and sun–bluest of skies, brightest of mountain-tops, with those noble brows of russet and purple crag overlooking the churchyard’s golden green.

All our wreaths lie there still, withering away, forlorn tributes of affection. But there are whiter wreaths on his grave than any we laid: garlands of snow, unsullied, from Heaven.

So Mr. Collingwood ended his Life of Ruskin. Some years later, when their time arrived, he and his wife, Edith Dorothy Collingwood, would take their places in graves a few feet from Ruskin’s, as would, at still later times, their children, Robin, Ursula, and Ethel. Having loved them all very much while they were alive together, he was delighted with their choice of final resting place and the chance of their everlasting company.

[from left (rear row, left of the path), The Collingwood Family,
Joan and Arthur Severn, their daughter, Lily, and Ruskin]

Be well out there.

P.S.: The reference is to Ruskin’s magnificent celebration of the pine in the last (5th) volume of Modern Painters. To read it, see Post 159: Recomposing the Pines.

P.P.S.: After Ruskin’s death, Collingwood was given the honor of designing his grave-marker. It remains one of the finest tributes to the life and work of a great soul ever designed: see Post 110: The Ruskin Cross.

1 Response to 170a: Mr. Collingwood on Ruskin’s Passing