We have, for some time now, been neglectful of Mr. Ruskin’s political economy. Still, during the glorious summer months, amidst the many sweet things Nature so generously gives us, it’s a forgivable oversight. But, today we return to that critical theme with a consideration of one of his brief, but, as always, trenchant, passages about how we can live together a little more salubriously as we, as we always must, do business with one another.

By the late 1850s, Ruskin had  arrived at one of life’s liminal moments. He had become convinced that the selfishness and greed legitimized by the laissez-faire version of capitalism were the primary culprits undermining human decency in trade and much else. Having been taught by the wider culture for decades that human beings were primarily interested in gratifying themselves, the Golden Rule had been stood on its gentle head, and many, if not most, framed their days by emerging from their houses ready to devour others before they were devoured–see, as examples of these forces at work, Posts 103: The Fairbanks of Bradford; 104: An Embarassment of Riches; 105: Some Remarks Pertinent to Posts 103 and 104 and a Report on an Important Conference in the Alps.

Ruskin’s first systematic exposition of his convinction–a conviction that, in due course, as he published Unto this Last, Munera Pulveris, The Crown of Wild Olive and Time and Tide during the 1860s, would transform him from revered cultural icon to social pariah–was a pair of lectures called, initially, The Political Economy of Art, and, later, A Joy For Ever, echoing the first stanza in Keats’ “Endymion.” The argument he advanced in his talks was simple: without regular exposure to great art, the human capacity for imagination atrophies and delight in life languishes, incalculable losses which leave us prey to accepting the thesis that self-seeking is life’s raison d’etre. Knowing the importance of art, was it not then our responsiblity to find, nurture, and support those few precious among us who possessed great artistic talent, so that they, as their days passed and their works grew in loveliness and significance, could bestow on us their gifts, it was ever the case that

A thing of beauty is a joy for ever:
Its loveliness increases; it will never
Pass into nothingness; but still will keep
A bower quiet for us, and a sleep
Full of sweet dreams, and health, and quiet breathing.

The lectures are still marvels to read and, for anyone interested in watching the arc of his political economic work develop, essential (they are easily found on the web). We’ll return to them at some point, but this brief introduction will suffice to bring us to today’s sentences. Having set the stage in his earlier remarks critical of laissez-faire, Ruskin suggests that we

may, at least, labor for a system of honesty and kindness in the…commerce of our daily life… Every person who tries to buy an article for less than its proper value, or who tries to sell it for more than its proper value, every consumer who keeps a tradesman waiting for his money and every tradesman who bribes a customer to extravagance by credit, is helping forward, according to his own measure of power, a system of baseless and dishonorable commerce, and forcing his country down into poverty and shame… [P]eople of moderate means and average powers of mind would do far more real good by merely carrying out sternly the principles of honesty [in their business dealings]..

If we do not determine to trade thus, he continued, it is inevitable that things will wind up–as pointedly suggested by Charles Besotti in this cartoon that appeared in  the New Yorker a few years back–in a situation which cannot help but brim over with fear, anger, envy, frustration, chicanery, cozening, competition, rapine, and tears. 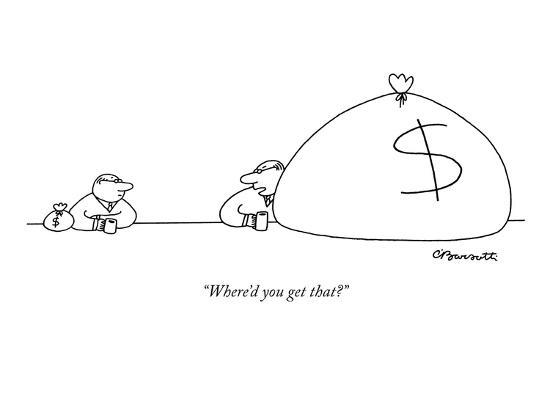 (If you read today’s economic texts, you will learn that the word “wealth” is defined as “the total value of all the assets of worth owned by a person, community, company or country, including the value of one’s income, savings, stocks, bonds, houses, art, and other possessions.” As examples of how possession of varying amounts of such holdings plays out, consider that, in the UK in 2013, the richest 10% of the population controlled 52% of the nation’s wealth, while the bottom 50% held 9%; in the US, in that same year,  the richest 10% controlled 76% of the nations wealth, while the bottom 50% held 1%!–inequalities more than sufficient to generate the adjectives above. (Ruskin, you’ll recall defined “wealth” quite differently: Post 81.)

In other words, until next time, trade carefully out there!

P. S.: If you are intrigued, Keats’ “Endymion” can be found here. If you go to this site you’ll get a running start on understanding this wonderful poem.

This entry was posted in Art, Society, Truths and tagged A Joy for Ever, Charles Besotti, Endymion, John Keats, John Ruskin, Munera Pulveris, Ruskin, The Crown of Wild Olive, The New Yorker, the political economy of art, Time and Tide, Unto this Last. Bookmark the permalink.