152: The Glorious Bow (and other nautical wonders)

For Jack Harris and David Barrie,
serious sailors on opposite sides of the Atlantic

There can be no doubt, and it is often said, that Ruskin was a polymath. I’ve never had much liking for the word, it always making me think of having been given much too much trigonometry homework. But it is apt. The OED, noting that the word descends from the Greek, defines a polymath as someone who has learned much (“math”) about many things (“poly”). Clearly, Ruskin.

Over the course of his life, almost everything attracted his eager eye and mind. Intrinsically beautiful and grandiose things, such as he rendered in “Rocks in Unrest,”  which he drew in 1853 on the St. Gothard Pass between Switzerland and Italy as an illustration for the fourth volume of Modern Painters (now in the Thaw Collection of the Pierpont Morgan Library in New York): a marvelous painting. 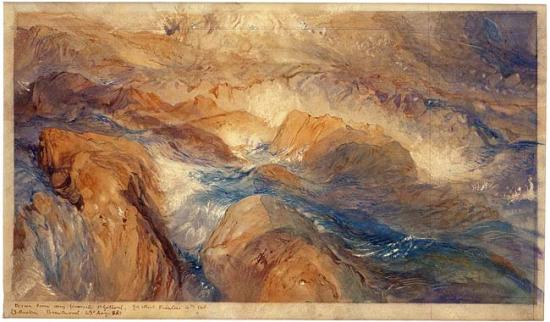 But, just as importantly, there were the tiny, almost always overlooked things, like these stunning “Dead Oak Leaves,” painted more than two decades later (now in the Collection of The Guild of St. George, Sheffield, UK):

If we would but attend, he always said, we would find that beauty was emodied in everything, even in those things that usually seem inconsequential to our dim sight. Here’s a brief passage from Modern Painters I which says this, but better. (Thanks to Doug Seiler for forwarding me this passage which–it will come as no surprise!–is to be found in Rose Porter’s wonderful Nature Studies from Ruskin (Post 150, Post 151)!

Though Nature is constantly beautiful, she does not exhibit her highest powers of beauty constantly, for then they would satiate us and pall upon our senses. It is necessary to their application that they should be rarely shown. Her finest touches are things that must be watched for, her most perfect passages of beauty are the most evanescent. She is constantly doing something beautiful for us, but it is something which she has not done before and will not do again, some exhibition of her general powers in particular circumstances which, if we do not catch at the instant it is passing, will not be repeated…

Below he reports on another unexpected example of beauty, a delight which has surely been missed by all but the most dedicated sailors among us.

I’ve often said that much of Ruskin continues unread. Perhaps one of the least read books in this lamentable category is 1856’s The Harbours of England. Its purpose, which will hardly surprise anyone who has followed this site for any time, being to celebrate the unparalleled genius of J. M. W. Turner (Post 37 Post 89, Post 121, Post 147), this time by extolling Turner’s exquisite paintings of boats and the sea.

Here is how he begins his small book: by drawing our attention to something wonderful that his polymath eyes have seen, and, having seen, has come to love for its greatly underappreciated beauty:

Of all things living or lifeless upon this strange earth, there is but one which, having reached the mid-term of appointed human endurance on it, I still regard with unmitigated amazement. I know indeed that all around me is wonderful–but I cannot answer it with wonder; a dark veil, with the foolish words, “Nature of Things” upon it casts its deadening folds between me and their dazzling strangeness. Flowers open, and stars rise, and it seems to me they could have done no less. The mystery of distant mountain-blue only makes me reflect that the earth is of necessity mountainous. The sea-wave breaks at my feet, and I do not see how it should have remained unbroken.

But one object there is still, which I never pass without the renewed wonder of childhood–and that is the bow of a boat. Not [the bow] of a racing-wherry, or revenue cutter, or clipper yacht, but the blunt head of a common, bluff, undecked sea-boat, lying aside in its furrow of beach sand. The sum of Navigation is in that!

You may magnify it, or decorate it as you will; you do not add to the wonder
of it. Lengthen it into hatchet-like edge of iron, strengthen it with complex tracery of ribs of oak, carve it and gild it till a column of light moves beneath it on the sea, you have made no more of it than it was at first. That rude simplicity of bent plank that can breast its way through the death that is in the deep sea has in it the soul of shipping.

Beyond this, we may have more work, more men, more money, we cannot have more miracle. For there is, first, an infinite strangeness in the perfection of the thing as the work of human hands. I know nothing else that man does which is perfect but that. All his other doings have some sign of weakness, affectation, or ignorance in them. They are overfinished or underfinished; they do not quite answer their end, or they show a mean vanity in answering it too well.

But the boat’s bow is naïvely perfect–complete, without an effort. The man who made it knew not he was making anything beautiful as he bent its planks into those mysterious, ever-changing curves. It grows under his hand into the image of a sea-shell, the seal, as it were, of the flowing of the great tides and streams of ocean stamped on its delicate rounding. He leaves it, when all is done, without a boast. It is simple work, but it will keep out water. And every plank thenceforward is a fate, and has men’s lives wreathed in the knots of it, as the cloth-yard shaft has their deaths in its plumes.

Then, also, it is wonderful on account of the greatness of the thing accomplished. No other work of human hands ever gained so much. Steam-engines and telegraphs indeed help us to fetch, and carry, and talk. They lift weights for us, and bring messages with less trouble than would have been needed otherwise. This saving of trouble, however, does not constitute a new faculty; it only enhances powers we already possess.

But, in that bow of the boat is the gift of another world. Without it, what prison wall would be so strong as that white and wailing fingeŗ of sea? What maimed creatures were we all, chained to our rocks Andromeda-like, or wandering by the endless shores, wasting our incommunicable strength, and pining in hopeless watch of unconquerable waves! The nails that fasten together the planks of the boat’s bow are the rivets of the fellowship of the world. Their iron does more than draw lightning out of heaven, it leads love round the earth.

Tom Hopkins (1944-2011), an uncommonly fine Canadian painter, knew how marvelous bows were. Here, in his picture, “Lifeline, at Sunset,” is one proof.

And here, in “Lifeline, the Stranger” is another, this time with a view from the stern.

Then there was Turner himself, whose skill with the brush and deep understanding of all that he painted, Ruskin was always trying to show us. Here’s one of the master’s images which Ruskin features in The Harbours, Turner’s drawing of the Port of Whitby (1825):

Turner, Ruskin tells us, grasped, like no painter before or after, what boats were, understood their significance in the world. Here’s another example, his rendition of Portsmouth harbor (1824-5). In viewing which, as in the picture of Whitby, we have the advantage of Ruskin’s readers, because they, poor souls, given the limited technology of the time, had to be content with black-and-white images. (Both Turner pictures are at the Clore Gallery, Tate Britain, London): Portsmouth.

For our last example of the delights that previously underappreciated bows, ships, and harbors bestow, here is one of Ruskin’s own sketches–of a happy sailboat performing its appointed function in the lagoon of Venice on the 23rd of May, 1846. (The sketchbook is at The Ruskin Museum in Coniston, UK.) There is, of course, the glorious bow carving its way through the waves, while, at the same time, the sails and other elements of the vessel do their intended tasks, all illustrating the joy that always attends a good sail.

Sail well out there.

4 Responses to 152: The Glorious Bow (and other nautical wonders)