Quite some time ago, in the second passage included in the first post of this series (“Every Dawn of Morning”), I featured the following marvelous words of Ruskin’s from The Seven Lamps of Architecture (1849):

God has lent us the earth for our life. It is a great entail. It belongs as much to those who are to come after us…as to us. And we have no right, by anything we might do or neglect, to involve them in unnecessary penalties or deprive them of benefits which it was in our power to bequeath… Every human action gains in honor, in grace, in all true magnificence, by its regard of things that are to come… Therefore, when we build, let us think that we build forever. Let it not be for present delight, nor for present use alone. Let it be such work as our descendants will thank us for, and let us think, as we lay stone on stone, that a time is to come when those stones will be held sacred because our hands have touched them…

The sentiment and import of this passage seemed to me to be a nearly perfect statement of how we should think about all the acts of our days. They still have that significance. Nevertheless, at this particular juncture in The Seven Lamps, Ruskin was trying to impress on his readers the idea that the buildings of our lives are no incidental things, things created for use only, whether they be homes, offices, stations for fire engines, churches, synagogues, or mosques. Rather, he said, given their relative permanence, all our buildings should be seen as occasions for delight, as sculptures in stone or wood, created, like the best paintings, with the goal of enriching the lives of all who would see or live  or work in them, not only now but deep into the future. Only when they possessed such uplifting qualities, he said, would they be instances of architecture at its best.

Although Ruskin’s words would not be written for hundreds of years, the builders of medieval Europe’s great cathedrals understood this principle and, accepting the responsibility that attended such knowledge, embodied it in their magnficent edifaces. In earlier posts, trying to point to the reasons for such magnificence (and to the reasons why millions of us lay down many more millions of dollars or pounds to go and see these buildings–or perhaps, if more lamentably, so that we might have our pictures taken in front of them!)–we had some careful looks at some of these fantastic creations (Post 97 Post 98; Post 99).

Now one of them is gone, or substantially so. On the morning of April 15 of this year, we learned, by means of one (or many) of the myriad ways we are noticed these days, that Notre-Dame de Paris, the City of Light’s iconic cathedral, was in flames, was, in fact, burning out of control. When, a day later, control was finally realized, there wasn’t a lot left. The main towers were saved, as were the incomparable stained-glass windows, and most of the most important historical artefacts. As for the rest, everything combustible was either destroyed or severely damaged. Much of the harder stuff–statues, marble columns–was melted or cracked open by the heat. The burning of Notre-Dame was, and remains, a world tragedy, if only because so few of these incomparable buildings survive.

That said, rather than focus on what we have lost, I thought this post might take its unanticipated chance to reflect on what, before April 15, Notre-Dame was, and on what it  had meant to those who knew it first hand. After which, we shall find that other words of architectural wisdom of Mr. Ruskin’s will have special salience.

Here is what some of the most marvelous parts of the great building looked like before the conflagration:

The View from the Seine (South Bank) 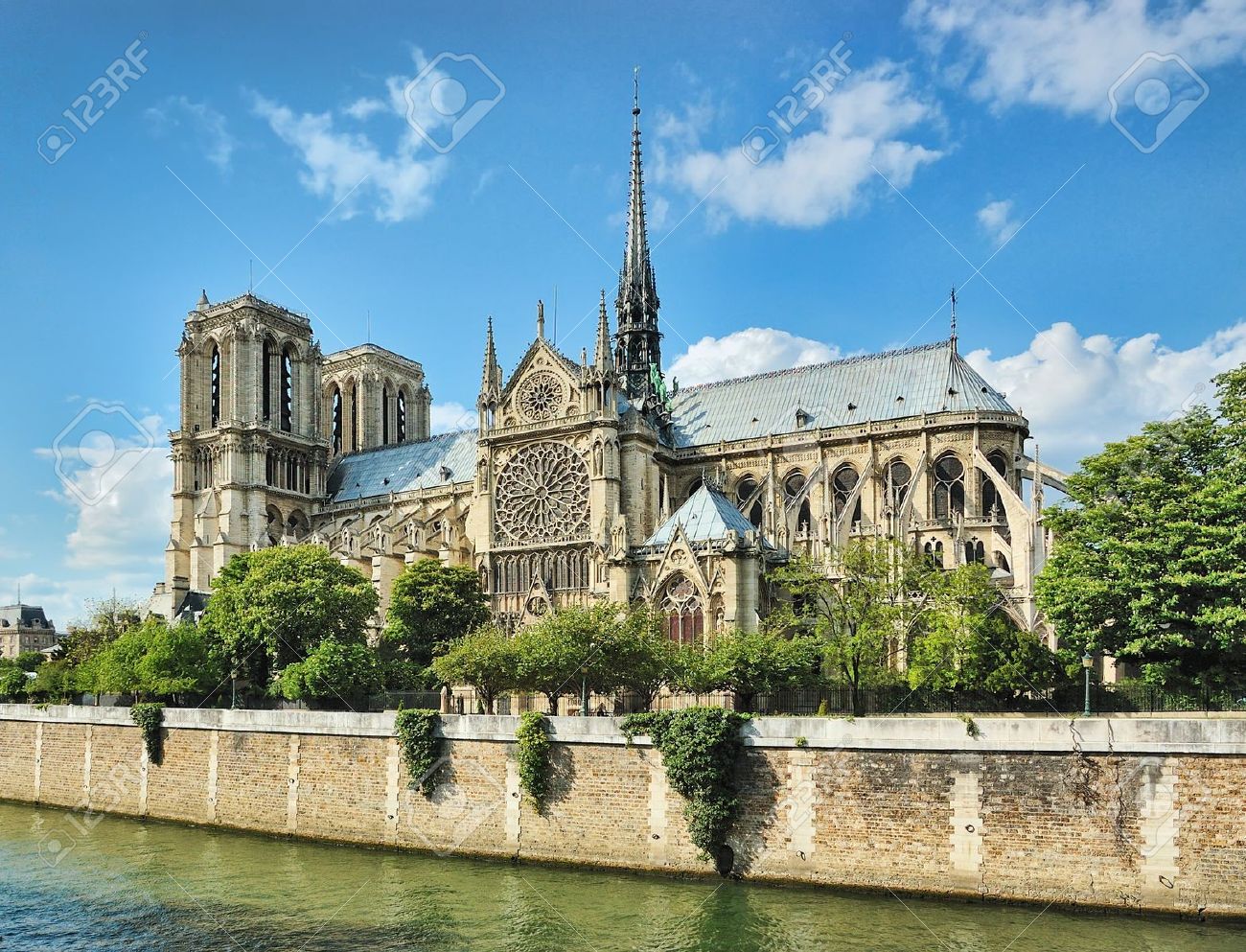 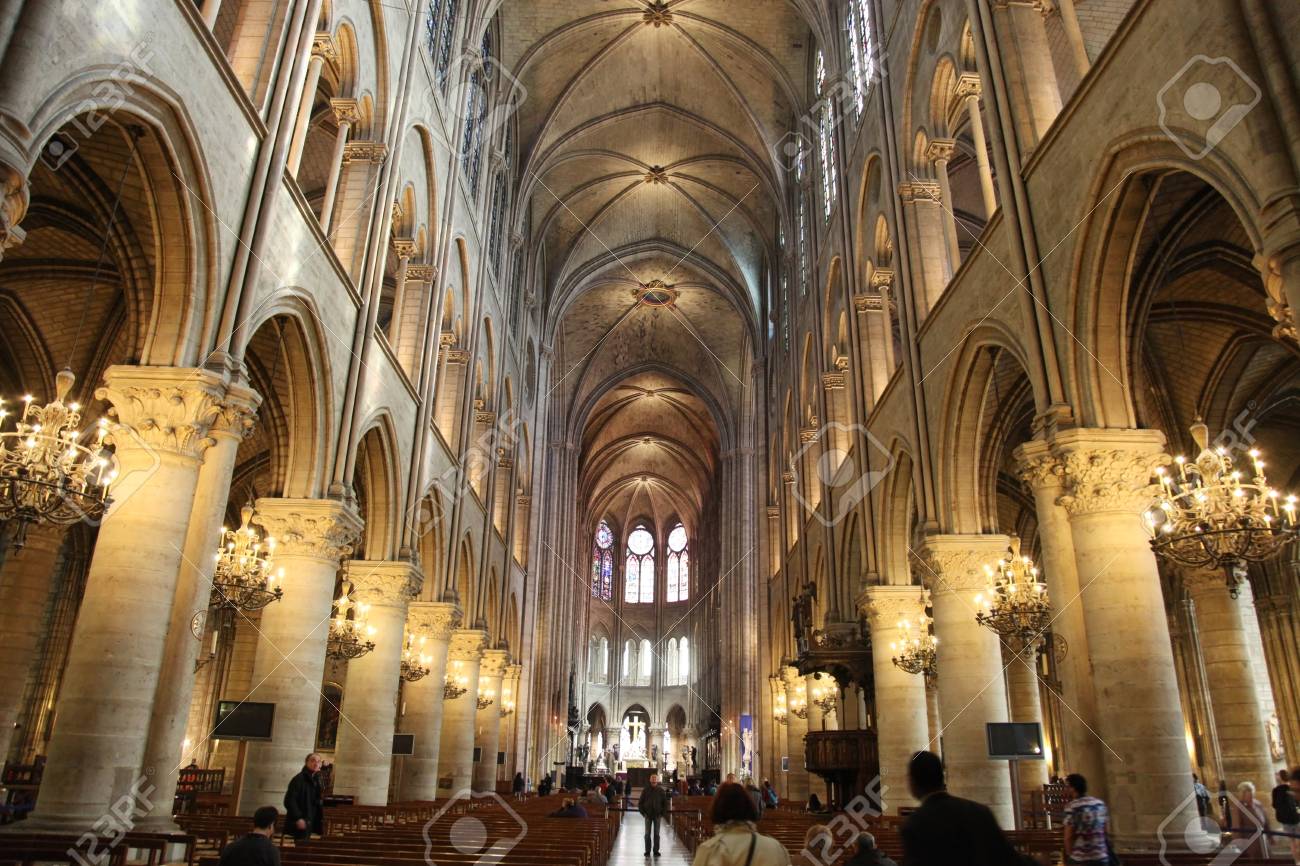 The Carvings in an Exterior Arch

Not surprisingly, a disaster of such magnitude was covered by every medium. Not least among these (as nearly always the case), was that of The New York Times. In the two days that followed the fire, their reporters spoke to many who had witnessed it or who had, during their daily Parisian rounds, become intimate with it. Here’s a sample of the remarks which The Times printed.

Sylvie Lacour, who lived near the cathedral for eight years, had watched it burn on television in Bordeaux. “The heart of Paris and my country is being gutted by the flames,” she said. “I am devastated!” Adding: “I am what you call a lapsed Catholic, but I always found Notre-Dame to be a deeply spiritual place, even though it was also a tourist spot. It felt vibrant and serene at the same time.'”

Former US Secretary of State, Hillary Clinton wrote, “My heart goes out to Paris. Notre Dame is a symbol of our ability as human beings to unite for a higher purpose–to build breath-taking spaces for worship that no one could have built on their own.”

Lindsey Ellis, who visited the cathedral in 2017 to make a film about the famed Victor Hugo novel, The Hunchback of Notre Dame, said: “You can’t replace an 800 year old rose window. You can’t replace the original and brilliant technological innovations.”

For several years, Carolyn O’Neal, 74, of Lake Forest, Illinois, traveled to Notre-Dame with her mother and two sisters to pay tribute to their father who died  some years ago. Inside, her mother would light a candle for him and they would all sit in a pew facing one of the rose windows in remembrance of him. ‘When I heard today’s shocking and terrible news,” she said, “those memories of our special time when we honored our parents [her mother died in 2002] loomed softly in my mind,” calling her visits, “spiritual and not religious.”

Karine Berger, who works at the nearby Centre Pompidou Musuem, said: “Notre-Dame de  Paris is Paris. It’s a reference. It’s kilometer zero. It’s how we measure distance in France. It’s our roots, our civilization. I think of the generations of artists who spent all their lives working on this monument to God, to belief.”

“On one level, it’s a physical symbol of Western Civilization, even more than St. Peter’s in Rome given its age,” said Francois Heisbourg, a French analyst, “but on another level it’s embedded in popular culture. It features in Victor Hugo’s novel, of course, but also in films like ‘Amalie’ and ‘Ratatouille’… So much so that even in distant sections of America and the rest of the world, everyone knows this cathedral. It’s univeral, Western, religious, literary, and cultural, and that’s what makes it different from any other object. It’s the whole spectrum from the trivial to the transcendant, the sacred to the profane.”

Mr. M. Mbowou, a political scientist studying at The Sorbonne, said that Notre-Dame “is more than a cathedral. I am a Muslim, and I am still very moved when I see this place. It represents something deep. It transcends us. It’s a loss, not only for France, but for the world. It’s as if the pyramids in Egypt were destroyed.”

All of the above are remarks which, despite the unhappy reason for their being given voice, would have made Ruskin proud, for each, over a century and a half after The Seven Lamps of Architecture was written, and nearly seven centuries after the cathedral was completed (generally given as 1345), evidence the truth of his principle cited above: that when we build, we build better and greater when we build for the pleasure of those who will come after us. Here is some more from that same chapter, an essay which he called, “The Lamp of Sacrifice,” and by which he meant that all great architecture does more than is necessary to efficiently serve its designated function; all great buildings add things–things that are costly in terms of money, work, skill, and imagination–simply for the delight of adding them, a delight which transcends beyond their initial moment into the hearts and minds of those who encounter such buildings long after their creators have departed:

The benevolent regards and purposes of men in masses seldom can be supposed to extend beyond their own generation. They may look to posterity as an audience, may hope for its attention, and labor for its praise. They may trust to its
recognition of unacknowledged merit and demand its justice for contemporary wrong. But all this is mere selfishness and does not involve the slightest regard to, or consideration of, the interest of those, by whose numbers, we would fain swell the circle of our flatterers, and by whose authority we would gladly support our presently disputed claims.

The idea of self-denial for the sake of posterity, of practising present economy for the sake of debtors yet unborn, of planting forests that our descendants may live under their shade, or of raising cities for future nations to inhabit, never, I suppose, efficiently takes its place among the publicly recognised motives of exertion. Yet these are not the less our duties! The earth is an entail, not a possession. Nor is our part fitly sustained upon the earth unless the range of our intended and deliberate usefulness include not only the companions but the successors of our pilgrimage…[Next comes the passage cited above, after which Ruskin continues:]

And this the more, because it is one of the appointed conditions of the labor of men that, in proportion to the time between the seed-sowing and the harvest, is the fulness of the fruit, and that, generally, the farther off we place our aim, and the less we desire to be ourselves the witnesses of what we have labored for, the more wide and rich will be the measure of our success. Men cannot benefit those that are with them as they can benefit those who come after them, and of all the pulpits from which human voice is ever sent forth, there is none from which it reaches so far as from the grave…

[I]it is in that golden stain of time that we are to look for the real light, and color, and preciousness of architecture. And it is not until a building has assumed this character, until it has been entrusted with the fame, and hallowed by the deeds of men, until its walls have been witnesses of suffering, and its pillars rise out of the shadows of death, that its existence, more lasting as it is than that of the natural objects of the world around it, can be gifted with even so much as these possess of language and of life.

Reflecting on the spontaneous comments of those who had watched or learned of the burning of Notre-Dame above, there can be no doubt that its creators built, built determinedly and successfully, for the pleasure of those who came long after them. To their great house they gave their breaths, muscles, infusing in it their passion and love, qualities which demonstrably have transcended both creed and the mighty passing of time. Would that we learn what they knew about the importance of their architectural obligations and so build now.

But, as mentioned above, all was not lost. Some parts of the building survived and, in due course, will be seen again, admired again, and inspire again.

All else for which these builders sacrificed has passed away; all their living interests and aims and achievements. We know not for what they labored; we find no evidence of their [material] reward. Victory, wealth, authority, happiness–all have departed… But of them, and their life and their toil upon the earth, one reward, one evidence, is left to us in those [remaining] gray heaps of deep-wrought stone. They have taken with them to the grave their powers, their honors, and their errors. But they have left us their adoration.

Which is the enduring gift of great architecture, the gift of Notre-Dame.