John Ruskin first saw the Alps in 1833. He was 14. A year before, on his birthday, his father’s business partner, Henry Telford, had paid a visit, bringing with him a book for the celebrant, a copy of Samuel Roger’s Italy, a collection of poems praising the beauties and historical significance of the great nation to England’s south. To illustrate some of his poems, Rogers had commissioned the painter J. M. W. Turner, about whom, at this moment, Ruskin knew next to nothing. On seeing them, however, the teenager was immediately transfixed. Never had he seen art that showed life and nature infused with the vibrancy which he himself always saw in them. Was there really a city like the Venice Turner had painted? Were there really mountains like the Alps he recorded?

J. M. W. Turner, “Venice: The Doge’s Palace and the Piazetta from the Lagoon” (Tate Britain)

What would he not give to visit them? Recognizing his longing, and loving her genius child very much indeed, after some few weeks passed, Margaret made a suggestion: that they, the family, should go and visit these places.” To which her husband, John James, loving their genius child equally as much, had said, “Why not?” And so it came to pass that, a short time after, they decamed for the continent, the two elders with a son quite simply enraptured at the prospect of what lay before them. They crossed from Dover to Calais. After a few days there, at leisurely pace, they made their way through northern France, Belgium, the Netherlands, and Germany, emerging, some weeks later, from the famed Black Forest near the city of Schaffhausen on the Swiss-German border, their stopping there occasioned by the chance to see its world-famed waterfalls, which had, not surprisingly, been painted by Turner 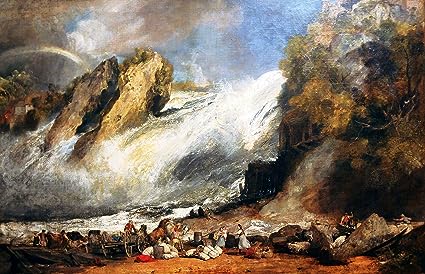 J. M. W. Turner, “The Fall of the Rhine at Schaffhausen” (Museum of Fine Arts, Boston)

Ruskin’s description of that visit to the falls remains one of his greatest evocations of the glories of nature and I’ll make sure that we read it some later time as we make our way along the road on which these posts are taking us. Like his hero, Turner, Ruskin would also paint the falls, a watercolor that Turner, seeing it when attending a dinner at the Ruskins’ home some years later, rather envied. (For an image of it, see Post 21: Ruskin’s Art.) But today, we must give our attention to Ruskin’s first sight of the Alps, a viewing which would transform his life and, in consequence of that, the intellectual life of his century and the history of western art.

It is now a half-century later, a lovely winter morning at Brantwood in the mid-1880s. Ruskin, as always, is in his study. After a long and loving look at the snow-covered mountain (“The Old Man”) across the lake, he sits to write, his task today to write a first draft of what will become the sixth chapter of his autobiography, Praeterita (a memoir that, intentionally, only celebrates the lovely experiences and people in his life). As the new sentences slide from his memory onto his blue writing paper, he brings himself back to that remarkable day when Mr. Telford had given put in his hands a spanking new copy of Roger’s Italy, with, inside it, those incredible reproductions of Turner’s vignettes, images which became the inner prod telling him that he had no choice but to go and see what Turner had seen. He reports  something of the early weeks of the family’s excursion briefly and then makes his pen tell of the evening of the day when they had arrived at Schaffhausen. It was rather late in the day, he says, when they emerged from the Black Forest and came to this city on the Rhine. They took a short rest and after, had  an early dinner. After which, Ruskin recalls, coming to the life-changing moment, they decided to  climb to an elevated garden above the city. Far below them, the Rhine was heard roaring as it plunged over the famous falls. Their vantage afforded fine views to the east and west, but then…

There was no thought in any of us for a moment of their being clouds! They were as clear as crystal, sharp on the pure horizon, and already tinged with rose by the sinking sun. Infinitely beyond what we had ever thought or dreamed. The walls of lost Eden could not have been more beautiful to us…

I went down that evening from the garden-terrace with my destiny fixed in all of it that was to be sacred and useful… [For] the Alps and their people were [always to me after that] alike beautiful in their snow and their humanity. I wanted neither for them nor myself sight of any thrones in Heaven, but these rocks, nor any spirits in Heaven but these clouds.

Of this marvelous first trip, he would write in Praeterita, “We did not travel for adventure,” Ruskin wrote, concluding his chapter, “nor for company, but to see with our own eyes, and measure with our own hearts.”

And so began what would become, by the time his last Continental excursion ended in almost complete mental collapse in late 1888, a series of trips over what Ruskin would come to call his “Old Road,” trips of varying length and, to some degree, varying itinerary, but always lead through France and Switzerland before crossing over one of the great Alpine passes before a descent into Italy. The excursions would become the fuel igniting the majority of Ruskin’s work on art and nature (as numerous earlier posts have shown). Below is a map detailing their general course, a map designed by Keith Hanley and Rachel Dickinson for their book, Journeys of a Lifetime: Ruskin’s Continental Tours, and used here with permission.)

One can’t really understand the breadth that is Ruskin without having some grasp of where his Old Road was, of how it stimulated so much of his work, and of what it meant to him personally. I introduce it now because, for the next three weeks, I’ll be–with my lovely wife, Jenn, and some dear friends–traveling on it, the Northern Italian part of it at all events, and it is in my mind to send out some posts as we go along.

What’s above was written while we were still in Porto, Portugal (where, by the way, the wine that takes its name from the city is as spectacular as one might hope!). The next morning we flew to Milan. About a half hour from landing, Portugal, Spain, and Southern France now behind, one of us chanced to glance out the window, where…

… the same breath-taking Alps that Ruskin and his parents had seen from another, considerably lower vantage, a hundred and eighty-five years earlier, still possessing, despite having a great deal less snow on them, their ability to astound. No wonder that the reverence which his sighting inspired altered his life.

Above I said that it was Turner’s vignettes in Rogers’ book of poems that had fired Ruskin’s imagination so intently that it became impossible for him to rest until he had had the chance to visit for himself the places where the painter had worked. To sense once more why it was that, after seeing Turner’s drawings, he became so enthused, and why it was that he was pulled as if by an insistent, unbreakable cord to see such sights for himself, it is not a bad idea, in closing, to give one or two other examples of the pictures Turner created to illustrate Rogers’ verses. They will also serve to give us a sense of how it would come to be that the entirety of Ruskin’s five Modern Painters books all have as their primary goal the demonstration of the fact that Turner was not merely England’s greatest painter, but one of the greatest painters who ever lived.