Today, February 8, is the day, 198 years ago, when the subject of these posts drew his first breath. Not long after, when he was but three, he gave his first lecture, intent then, as he would be for the remainder of his days, on making the world a better place. He recalled that auspicious moment in his unfinished autobiography, Praeterita, telling us there that, on an impulse one afternoon, when many were assembled at his parents’ house, he commandeered a little stool, mounted it, and admonished all within sound of his little voice with these words: “People, be good!”

It is now almost half century later and, in the interim, the small lecturer has become one of the most famous writers in the world. On this particular morning he is rowing on the Lake of Geneva. He has been traveling to Switzerland and the Alps since he was 13, adoring them for their consummate beauty; has written paeans to their mountains (Post 64), rivers, fields, forests, sunrises, sunsets, even their mosses (Post 65), in all (five) of his Modern Painters books, has written, using every ounce of his estimable authorial might, to inspire his readers to go and see these lovelies for themselves and, in consequence of this good choice, become, like him, worshipers of their beauty, and understand how, in their pure state, these things support not only our lives, but all life. Not a few have taken the advice.

But on this Spring day, on this marvelous lake, surrounded on almost all sides by mountains ranging from the unspeakably spectacular to the simply marvelously impressive, his mood is darker. He is having on at the scientists and the businessmen who have used the recent discoveries  of science to enrich themselves at nature’s and humanity’s expense. The passage I cite below comes from the “Preface” to The Queen of the Air, published later that year, a book Ruskin always thought one of his most important (and which almost no one reads today), his attempt to make us see that, without a reverential connection with the underlying spirit of nature, we all suffer, inevitably, perpetually. I include the passage as well to remind us of the raison d’etre of these posts, to make palpable the continuing relevance of Ruskin’s words to our own, stunningly advanced modern world.

On this  first day of May, 1869, I am writing where my work was begun thirty-five years ago, within sight of the higher Alps. In that half of the permitted life of man, I have seen strange evil brought upon every scene that I best loved and tried to make beloved of others. The light which first flushed those pale summits with its rose at dawn, and purple at sunset, is now umbered and faint. The air which once inlaid the clefts of all their golden crags with azure is now define with languid coils of smoke, belched from worse than volcanic fires. The very glacier waves are ebbing, and their snows fading, as if Hell had breathed on them. The waves that once sank at their feet into crystalline rest are now dimmed and foul, from deep to deep, and shore to shore.

These are no careless words; they are accurately, horribly, true. I know what the Swiss lakes were–no pool of Alpine fountain at its source was ever clearer. This morning, on the Lake of Geneva, at a half mile from the beach, I could scarcely see my oar-blade a fathom deep. The light, the air, the waters, all defiled!…

Ah, masters of modern science, give me back my Athena out of your vials… You have divided the elements–and united them; enslaved them upon the earth, and discerned them in the stars. Teach us, now, but this of them–which is all that man need know–that the Air is given to him for his life, and the rain for his thirst and for his baptism, and the Fire for his warmth, and the Sun for sight, and the Earth for his meat–and his rest.

From these passionate sentences it is easy to see why Ruskin is considered by many, myself among them, as the first environmentalist. But that categorization, while apt, is too simple, too reductionistic–for Ruskin is always, as here, trying to get us to see that the defiling which he is detailing the enormity of, is a sin not merely against nature, but against life and all that is good in this world. Some, during his days, registered the point.

And so, it is in this context that I offer below, to celebrate his birthday and repay something of the debt we owe Ruskin, a few of the economia which these perspicacious shared with their own readers. To my mind, all their comments pertain perfectly to the passage we have just read about dimming of the Alps and the pollution seeping into and fouling Geneva’s glorious lake. On the other hand, they pertain just as perfectly to all the Ruskin words we have read along throughout this entire series of posts.

Our first remarks come from Leslie Stephen, a celebrated literary critic and biographer of the time. Of Ruskin’s writing, he wrote the following in his Studies of a Biographer (1898): When we read Ruskin, he says, we

are everywhere in contact with a real human being, feeling intensely, thinking keenly, and, even when rhetorical, writing not to exhibit his style or his eloquence, but because his heart burns within him.

The next praises come from another prominent literary critic,  G. K. Chesterton. They were published in his The Victorian Age in Literature (1914):

As an artist in prose, he is one of the most miraculous products of the extremely poetical genius of England. The length of a Ruskin sentence is like that length in the long arrow that has been boasted of by the drawers of the bow. He draws not a cloth-yard shaft, but a long lance to his ear. He shoots a spear. But the whole goes light as a bird and straight as a bullet.

Next we read a few sentences of Marcel Proust’s, the author of what is often argued to be the greatest of all French novels, Remembrance of Things Past. Proust loved Ruskin and wrote nearly countless words in celebration of him. These are from the “Preface” to La Bible d’Amiens, his translation of Ruskin’s The Bible of Amiens (1904):

Ruskin’s special gift was the feeling for beauty, in nature as in art. It was in Beauty that his nature led him to seek reality… But this Beauty to which he thus happened to dedicate his life was not conceived by him as an object of enjoyment made to charm, but as a reality infinitely more important than life, for which he would have given his own life.

Then there are those who, as if they have been touched by an alchemist, are utterly transformed by Ruskin’s works, those few who took what they learned from him, transferred it into action, and changed the world with the new knowledge. Changed India for one, and, in the wake of that alteration, gemerated a human tsunami which, before only a few decades passed, swamped the entire colonial world, a world that had reigned supreme for over three centuries. Gandhi wrote about the effect Ruskin had on his life in An Autobiography, Or the Story of my Experiments with Truth (1927), in the following way–an applause which, surely, would have brought a smile to the face of that little three-year old fellow who, standing on a stool in London in 1822, had enjoined those within sound of his voice to “be good.”

I cannot claim much book knowledge. However, I believe I have not lost much because of this enforced restraint. On the contrary, the limited reading I have done may be said to have enabled me thoroughly to digest what I did read.

Of these books, the one that brought about an instantaneous and practical transformation in my life was [Ruskin’s] Unto this Last. I translated it later into Gurjarati, entitling it Sarvodaya (“The Welfare of All”). I believe that I discovered some of my deepest convictions reflected in this great book of Ruskin’s, and that is why it so captivated me and made me transform my life…

The teaching of Unto this Last I understood to be: 1. That the good of the individual is contained in the good of all. 2. That a lawyer’s work has the same value as the barber’s, inasmuch as all have the same right of earning their livelihood from their work. 3. That a life of labor–i.e., the life of a tiller of the soil and the handicraftsman–is the life worth living.

The first of these I knew. The second I had dimly recognized. The third had never occurred to me. Unto this Last made it as clear as daylight for me that the second and the third were contained in the first. I arose with the dawn, ready to reduce these principles to practice.

For last, consider an excerpt from a letter written in 1864 by the Edinburgh physician, Dr. John Brown, a dear friend of both Ruskin and Lady Pauline Trevelyan. At the time of its composing, Unto this Last has been out in book form for two years. It has been cudgeled thrice and more over by critics who do not like its arguments that the business of business is not business but, instead, is serving the well-being of one’s customers. In the meantime, the despoiling of Switzerland and the Alps has gone on apace–likely at always greater pace. Ruskin has been out of communication. Fighting the critics, the polluters, and others, he has neglected his letter writing. Lady Pauline, recently seriously ill (so ill she has been dictating her letters), irritated about the lack of contact, has mentioned to the good doctor something of Ruskin’s oversight. To which complaint, Dr. Brown replies: My dear Lady Trevelyan,

It is very pleasant to get your own handwriting. I can realize now how frightened I was that I would never see it again… May we all be thankful to God for His great goodness in keeping you to us. It was so good of you to write. Quite as good, let me tell your convalescent ladyship, as Ruskin writing you… Why shouldn’t he? What else has he to do? I see that he is fighting away in his insolvent and magnificent way in The Reader [a contemporary magazine] about his glaciers. I am sure he was wings under his flannel jacket. He is not a man, but a stray angel, who has singed his wings a little and tumbled into our sphere. He has all the arrogance, insight, unreasonableness, and spiritual sheen of a celestial.

And so, below, here they are, a few of those who loved Ruskin, Stephen, Chesterson, Proust, Gandhi, Dr. John Brown, and Lady Trevelyan. Fine souls all who, if by chance they happened to be with us on this particular February 8, would surely wish him the happiest of birthdays, and express their thanks that this special stray angel had been allowed to spend a few precious decades with us. 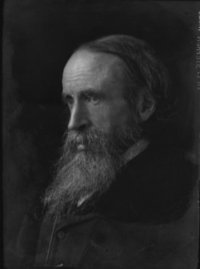 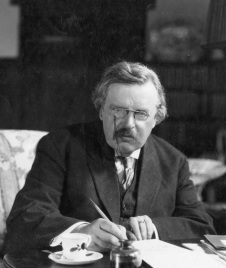 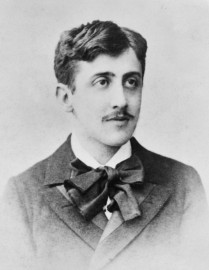 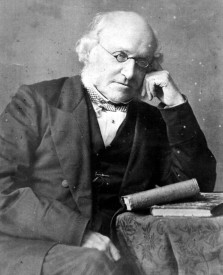 PS: I am duty bound to thank my dear and accomplished friend, Stuart Eagles, for gathering some of the above praises into a place where I could easily find them–his Wikipedia site devoted to Ruskin–a wonderful, safe, and sober island in that strange and wide ocean we call the internet. You can visit that place, here: Ruskin on Wikipedia

PPS: If you would like to read some of the earlier Ruskin encomia in these posts, type in “February 8” in the search engine to the right of this text, and/or click on the box “Previous Posts by Topic” and when the drop down menu drops down ( 🙂 ), choose “Encomia.”

2 Responses to 80: The Stray Angel (Recollections on Ruskin’s Birthday)