39: The Flowers that Bloom in the Spring (Tra La!)

Well, as it turns out, I can’t help it. After the winter we’ve had, another post pointing to the glory that is Spring seemed to be the right thing to do. Here it is.

At last, that late-arriving season is really doing what its name implies in the Finger Lakes–springing! First came the snowdrops, then the crocuses; gentle, delicate heralds of warmth approaching and more beautiful blossoms to follow. For their temerity in challenging the retreating winter, of course, they have been snowed on and hailed on and admonished with penetrating cold. But, resolutely, they ignored the affronts and kept on brightening the ground for us, as if their purpose was to insist that we look down so that we might remember how new life always emerges up from the earth. (Wonderful, funny, bit, from Michael Feldman’s Saturday morning program on PBS: “Whad’ya Know?” Last week, he began his show with a market report: “After strong advances, crocuses retreat!” As, indeed, in our garden, they have. But to recall what they looked like last week, see our previous post: #38)

Ruskin had abiding love for–and much to say about–these lovely things, the flowers.  For instance, one May, he wrote his dear friend in Coniston, Susie Beever, this:

I believe that there is often something in the spring which weakens one by its very tenderness. The violets in the wood send one home sorrowful that one isn’t worthy to see them, or isn’t one of them!

Of the sacredness of the snowdrops, he wrote, in his autobiography, Praeterita:

A snowdrop was to me, as to Wordsworth, part of the Sermon on the Mount.

Naturally, he assumed that readers of Praeterita would know, likely by heart, this poem of Wordsworth’s. For me, it captures perfectly the event that is the return of spring, reminding us of deeper issues as it grows along.

LONE Flower, hemmed in with snows and white as they
But hardier far, once more I see thee bend
Thy forehead, as if fearful to offend,
Like an unbidden guest. Though day by day,
Storms, sallying from the mountain-tops, waylay
The rising sun, and on the plains descend;
Yet art thou welcome, welcome as a friend
Whose zeal outruns his promise! Blue-eyed May
Shall soon behold this border thickly set
With bright jonquils, their odors lavishing
On the soft west wind and his frolic peers;
Nor will I then thy modest grace forget,
Chaste Snowdrop, venturous harbinger of Spring,
And pensive monitor of fleeting years.

And, just in case your living space in life doesn’t spring snowdrops, here’s what they look like: 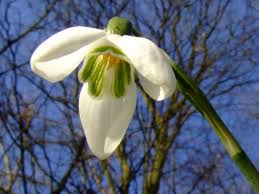 That image of Wordsworth’s –of the jonquils–or narcissus, or daffodils (as you like)–immediately brought to mind another of his poems, a favorite. When I was still teaching, I read it to my students around this time every year, hoping that the marvelous rhythms and images in the lines would start them looking.  Since mine’s a sociology class, some of them, I think, thought me a little odd.  (They may be right.)  Sometimes too, our home-grown supply  of these lovelies not abundant, and aware that there are more students in the class that our meager stock will serve, I pilfer a few of these delightfuls from the flower bed behind our president’s house, knowing that the purloined won’t mind because they understand that they have been chosen to accomplish higher (if brief) service. Knowing, too, that the president and his good wife, themselves servers of a superior sort, won’t begrudge the filchings given that they are directed toward greater appreciation (and, after all, the irises are coming). Sometimes the poem of Wordsworth’s is known by its first line, and sometimes it’s just called “The Daffodils.” Not that it matters much, for, whatever its title, it is difficult to know how anyone could not be warmed, enlivened, and have a sense of having inched closer to what Plato always called “the things that are” after reading:

I wandered lonely as a cloud
That floats on high o’er vales and hills,
When all at once I saw a crowd,
A host, of golden daffodils;
Beside the lake, beneath the trees,
Fluttering and dancing in the breeze.

Continuous as the stars that shine
And twinkle on the milky way,
They stretched in never-ending line
Along the margin of a bay:
Ten thousand saw I at a glance,
Tossing their heads in sprightly dance.

The waves beside them danced; but they
Outdid the sparkling waves in glee;
A poet could not but be gay,
In such a jocund company;
I gazed – and gazed – but little thought
What wealth the show to me had brought:

For oft, when on my couch I lie
In vacant or in pensive mood,
They flash upon that inward eye
Which is the bliss of solitude;
And then my heart with pleasure fills,
And dances with the daffodils.

Certainly, we know that the daffodils springing around Brantwood, Ruskin’s home in England’s Lake District, had such salubrious effect on him: “I never saw anything so wonderful as this narcissus!” he wrote Susie Beever at another time. “The perfect accuracy and finish of its lines!… [But, truth to say,] I’m scarcely able to look at one flower because of the two on each side in my garden right now! I want to have bees’ eyes—there are so many lovely things!” (I tried this in yellow first, but then some of you told me that it was hard to read and impossible to print–so, we are just going to have to put up with a spring green narcissus! 🙂 )

And here they are, yesterday, dancing, in a little garden on campus, in the (rather chilly) breeze, exactly 3303 miles (I asked Google) from Coniston, as eager as ever to bring us a bit of true wealth, and fill our hearts with pleasure:

But Ruskin himself was no slouch when it came to describing the flowers and their wonders in his works, as the following paragraph shows. If things keep going as they should, we too shall soon see the silk and flame he describes, our viewing hopefully enhanced a little because the crocuses, snowdrops, and daffodils have prepared the way to such seeings. I have in my hand a small red poppy which I gathered on Whit Sunday on the Palace of the Caesars, he wrote in Deucalion, his much overlooked book on the flowers and their names:

It is an intensely simple, intensely floral, flower.  All silk and flame: a scarlet cup, perfect-edged all round, seen among the wild grass far away, like a burning coal fallen from Heaven’s alters. You cannot have a more complete, a more stainless type of flower absolute—inside and outside—all flower. No sparing of color anywhere. No outside coarseness. No interior secrecies. Open as the sunshine which creates it. Fine-finished on both sides, down to the extremest point of insertion on its narrow stalk; and robed in the purple of the Caesars.

Which brings me, finally, to one of our subject’s central beliefs and frequent suggestions: that there is an intentionality in nature which is addressed to us and that, in all ages past, world round (and I know there are many world rounders out therereading these posts!), human beings see “the glory in the flower” without any help from Mr. Wordsworth or Mr. Ruskin (though such fellows do heighten our appreciation!), because always they choose blossoms to celebrate birth and soften death, to witness marriage vows, to gentle over an argument, to applaud a championship or a graduation, to adorn our tables, to brighten our hair, or frame our Buddhas in the kitchen, as this last passage–from Modern Painters V–says so splendidly. (The Pre-Raphaelites, by the way, were a group of 19th century English painters much championed by Ruskin for their remarkable ability to paint “close to nature,” among them Edward Burne-Jones, Dante Gabriel Rossetti, and John Everett Millais, all now acknowledged as world masters):

Flowers seem intended for the solace of ordinary humanity. Children love them. Quiet, tender, contented ordinary people love them as they grow. Luxurious and disorderly people rejoice in them gathered. They are the cottager’s treasure. And, in the crowded town, mark, as with a little broken fragment of rainbow, the windows of the workers in whose heart rests the covenant of peace. Passionate or religious minds contemplate them with fond, feverish intensity; the affection is seen, severely calm, in the works of many old religious painters, and [is] mixed with more open and true country sentiment in those of our own Pre-Raphaelites. To the child…the peasant and the manufacturing operative, to the grisette and the nun, the lover and the monk, they are precious always.